The Junipero Middle School was a Catholic private school in Los Angeles, California. The students were of diverse backgrounds. In fact, in spite of it being a Catholic school, it had a couple of Jewish students.

In 2013, an eighth-grade history class visited a Holocaust survivor named Anne Berkowitz living in the Hebrew Home for the Aging. She told them of her experiences hiding in a secret room in Amsterdam during World War II.

Berkowitz noticed that most of the students, while interested, did not really understand what the Holocaust felt like and couldn't really relate to her. She did not really blame them because they hadn't gone through what she had. 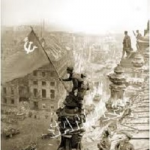