Charles Ethan Kenning (born August 19, 1943 in Chicago, Illinois) is an American singer, songwriter and musician, who performed as George Edwards when he led 1960s acid-rock band, H.P. Lovecraft. He was adopted as a child, and brought up under the name George Edwards; he reverted to his birth name of Ethan Kenning in his mid-30s.

A blues musician in the 1960s, Kenning helped form H.P. Lovecraft in 1966. The band released two albums before splitting up in 1969. Kenning has remained active as a producer and promoter.

George Edwards in "The Fillmore Shoggoth"[] 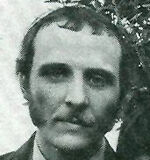 In the Spring of 1968, George and his band, HPL had a gig at the Fillmore in San Francisco. It was a somewhat ominous time for the country; in addition to all manner of political unrest, an iceberg that had broken off from the Ross Ice Shelf in 1966 had finally made its way north, without melting, to the San Francisco coast line.

Arriving in the city early in the day, George and the rest of the band decided to go to San Francisco Zoo to see the cave penguin exhibit. Upon hearing a recording that bragged that the San Francisco Zoo was the only zoo to have bred the penguins in captivity, band member Dave suggested somewhat seriously that the iceberg contained Old Ones, who wanted the baby penguins. George nervously laughed the idea off.

After leaving the zoo, the band bought lunch and then went on to the Fillmore to rehearse. George and his bandmates were surprised to see a pair of Old Ones in the audience. With them was famous author Howard Phillips, who'd written extensively on the Miskatonic Antarctic expedition that first alerted humans to the existence of the Old Ones, and Phillips' wife, Sonia.

The presence of the Old Ones prompted the band to actually give a good rehearsal. The Old Ones enjoyed the music. Phillips was not as enthusiastic in his praise.

After rehearsal, George and the rest of the band dropped LSD provided to them by the legendary Kid Charlemagne, and then went out to perform. (On the way out to the stage, George had to navigate around the mirage of a pit full of fire, brought on by the LSD.)

The band was only part way through their second song when the house emcee announced that the iceberg had landed near the Zoo, and deposited shoggoths in the city. The Fillmore began to evacuate, but then a shoggoth arrived. George watched as the shoggoth decapitated both of the Old Ones and then Howard Phillips in short order. George then witnessed the shoggoth destroyed by napalm, and then the band helped evacuate the grieving Sonia Phillips to nearby Lafayette Park.

After eating and sleeping through the night, George awoke the next morning, and was able to listen to a radio report about the shoggoth attack. He learned that 16 people were known to have been killed at the Fillmore, that two shoggoths attacked the De Young Museum, destroying all the extensive collection of Old One artifacts, and that one shoggoth had attacked the zoo and killed all of the cave penguins. George found the deaths of the harmless penguins sadder than any other part of the attack, and concluded he may not yet have come down from his LSD high.

There are enough clues in the story to confirm that the one-named "George" is indeed Ethan Kenning a.k.a. George Edwards.

Community content is available under CC-BY-SA unless otherwise noted.
Advertisement